Straight from the The Hoff’s mouth

For the continuation of the successful Kung Fury in feature film, the legendary Steven Spielberg is interested to produce the movie. In a recent interview given to French blog FilmsActu, David Hasselhoff aka “The Hoff” declared that legendary filmmaker Steven Spielberg was interested in producing the feature film sequel to Kung Fury, and that Mr. Spielberg personally reached out to David Sandberg about a possible involvement in the project: 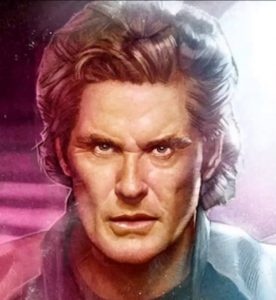 The song ‘True Survivor’ continues to ascend on youtube. It’s a great track and exceeded 25 million views. While working on it with David, I realized that something special was happening. This kid has talent. In fact, Spielberg wants to be associated with the project. One day, David comes to me and said « you know Steven Spielberg? » « Uh, of course! I met him once » « Well, he wants to produce the film. » That’s crazy. I’m looking forward to it!

You should know that the first movie – available on Netflix and Youtube in its authentic VHS-like quality – has been seen more than 26 million times. It is a fantastic short film that was financed through crowdfunding and raised over $650,000 on Kickstarter. It is a tribute to 80s action and science fiction films that directors such as Joe Dante, James Cameron or Robert Rodriguez must have enjoyed. It is no surprise that Spielberg is reportedly interested in being involved in the sequel. Let’s just hope that the movie will stay true to the first chapter and won’t turn into be a Michael Bay-like summer blockbuster. Fans of the original soundtrack hope the great Mich Murder will be back to score the sequel, and, we hope, will produce another great track featuring our favorite talking car-riding hero!