Call of Duty with Zombies in Spaceland

Here is a Retro 80 version of Call of Duty with Zombies into an attraction named Spaceland. In fact it’s the new Zombies mode of the recent « Call of Duty: Infinite Warfare » and it’s Activision that shows us the first images with a horrific spirit (of course) of the legendary game of war but this time with a retro 80 touch.

Since 2008 with « Call of Duty: World at War » the Zombies mode has become a completely primordial trademark for the license. Fans awaited with great impatience the horrifying version of bloodthirsty undead into their favorite game and it was the American giant « Activision » which broadcast this crazy trailer called « Zombies in Spaceland« . The story ? Basically it’ll be a pretext to knock out the most « walkers » (reference to Walking Dead) as possible under a soundtrack from the 80s with a retro-futuristic graphic identity. 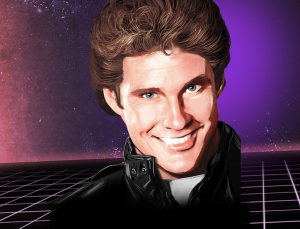 With the overriding ambition of using the « Call of Duty » graphic engine in a dimension completely opposite to the original, that’s to say literally fun and barred, the player is projected into an amusement park with a SPACE main theme, all of that in a very pronounced retro-futuristic atmosphere. Then, under futuristic scenery we can find rides as spaceships, zombies disguised as clowns, an energetic dancefloor and many more. Four emblematic characters are controllable with the particularity of being the digital copies of famous actors such as Seth Green, Ike Barinholtz, Sasheer Zamata and Jay Pharoah but it’s not finished, to this list is added the comic Paul Reubens and especially, be careful, the one who made vibrate all into our body with « Kung Fury » , David Hasselhoff the emblematic figure of the Eighties. The Hoff animates the dance floor because he’s the DJ of this mode game, for the pleasure of our ears. « Zombies in Spaceland » is now available since November 4, 2016, the official release of « Call of Duty: Infinite Warfare ». Good game to everyone!

1 comment on "Call of Duty with Zombies in Spaceland"